Comprises the Operations Division, the Key Points and Search Division which includes the Police Dog Unit, the Police Tactical Unit Operational Contingents, and the Fourth Generation of Command and Control Communications System Special Duties Team. It runs Headquarters Command and Control Centre on a 24/7 basis, deals with the staffing of operational matters including the relevant Force orders, boundary security, operational resources allocation and liaison with the Hong Kong Garrison and foreign military, plans and executes search operations, and develops the future command and control communications system.

Police Tactical Unit (‘PTU’) Headquarters includes Training Division, Support Division, Research and Development Division and the Special Duties Unit. Its main duty is to provide training on internal security and ensure the Force’s readiness to respond to any threat to public order or internal security. The PTU companies also provide Police Regions with readily available reserves of well trained and fully equipped manpower for any routine or emergency duty. PTU also continually reviews tactics and equipment used in crowd management and public disorder, to ensure both are relevant and develop with prevailing circumstances and threats.

Is responsible for dealing with all illegal explosive objects (other than small arms ammunition) including Chemical, Biological, Radiological and Nuclear (CBRN) Weapons in Hong Kong. The Bureau is trained and equipped to deal with items both on dry land and underwater and is called out, on average, over one to two times per week. Items dealt with range from illegal fireworks, improvised explosive devices (home made bombs) to large World War II aircraft bombs. 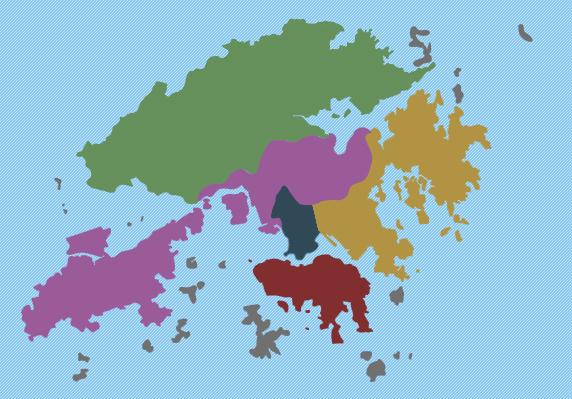 The Force is divided into six regions:

The regions are divided into 23 districts and divisions and in a few cases, sub-divisions. Regional police provide front-line policing 24 hours a day. They are responsible for the traditional constabulary functions of preserving life and property; preventing and detecting crime; keeping the peace; and responding in times of emergency.

Each of the five land regions has a headquarters comprising:

Operations Formation responsible for dealing with operational matters and procedures at Regional level. It is broken down into:

Crime Formation investigates serious and inter-district crimes. In addition, it collects, collates and evaluates intelligence on criminals and criminal activity within the Region.

Traffic Formation is responsible for:

The Marine Police maintain the integrity of the sea boundaries and regional waters of the Hong Kong Special Administrative Region (HKSAR). It is responsible for:

Operations Bureau which is responsible for all operational matters at Regional level, including:

Support Bureau which is responsible for:

Auxiliary Support Bureau provides a one-stop service in respect of the administration, management and training of the Hong Kong Auxiliary Police Force with 4000 members. The Bureau comprises:

is responsible for maintaining a high level of public confidence by robustly projecting a positive image of the Force through community and media relations. It is divided into three bureaus:

is responsible for the formulation and dissemination of traffic enforcement policies, the collation of related resource requirements, the processing of traffic summons and fixed penalty tickets, the monitoring of changes in traffic legislation, the development and evaluation of traffic management schemes, and the co-ordination of the Force's road safety efforts. It is also responsible for the administration of the Traffic Warden Corps, who assist the Police in the control of traffic and enforcement of parking offences. It comprises: